PROPOSALS: so much fun and SO nerve wracking!!!  I typically try to blend into the crowd wherever the future groom decides to propose, and this was no different.  I walked outside, took a seat with my camera concealed in my large purse, and waited for Ben to “take a walk” with Conor.  My heart was beating out of my chest and I was trying my best to play it cool.  By the time I needed to take photos, I was happy to have a really fast camera because I was shaking!!  As soon as I started clicking away, it drew interest from the crowd at Cedar Ridge and they all started “oohhing and aahhhing”.  It was difficult to hold back my happy tears as Ben got down on one knee and asked Conor to be his forever.

Ben’s side of the story:

How the met:
We both attended the university of Iowa for undergrad and met through an organization called dance marathon which raises money for children and their families with pediatric cancer. I was a senior and she was a junior. In the beginning that was our only interaction. We only saw each other at a meeting every couple months. Then after we had our big event for the organization in February of 2014 we had no more meetings. However, we ran into each other the weekend afterwards when we were both downtown. When we ran into each other I had had a couple drinks giving me some extra courage. It was our first conversation outside of dance marathon and we hit it off. The same thing happened the next two weekends without either of us having each other’s number. After that we exchanged numbers and I asked her out on a date. We went to Blackstone and we stayed so late talking that they had to ask us to leave because they were closing. I graduated in May and was set to start physician Assistant school that August at the university of Iowa while she had another year left of undergrad. That summer we spent a lot of time together and we both still regard it as one of the best we’ve had. We spent the next year both in school in Iowa City. I started rotations for school in January of 2016 which meant I’d be moving somewhere new every month. We had a strong relationship and knew we could handle the distance not to say it wouldn’t challenge us. She then moved to Chicago after she graduated making the distance a bit further. I then went to Tanzania and we spent 6 weeks with minimal communication. This is when i knew i wanted to spend he rest of my life with her. I told her when i got back we were never going to travel apart again. After I graduated in December of 2016 I took a job in Iowa. This was difficult as we would continue our long distance. I knew I would be making the move to Chicago and eventually got the opportunity to do so in October of 2017. After nearly two years of long distance we would be living in the same city again. At this time I started to think about proposing and looked into getting a ring. I had actually already asked both her parents who assured me I didn’t need to ask but appreciated it and gave me their blessing.

The proposal:
Plan A was to propose on our trip to Argentina in January of 2018. I didn’t have the ring in time for his to happen, which may have been a good thing because all our luggage was lost and we didn’t get it back for 6 days. So after that I had to come up with another idea. We had spent some time in wine country in Argentina and I had planned to do it at a winery so I figured I’d do it at one back in the states. There is a small winery near Iowa City where our relationship started so I decided to do it there. I bought the ring from a local jewler in Iowa City and left it at my parents house which is only 10 min outside of town so I wouldn’t have to worry about hiding it at my apt. I had planned to have all her close friends from Chicago and elsewhere to surprise her at a brewery in Iowa city after I proposed. I also had a surprise dinner with both our families at Blackstone (where we had our first date) set up for before that. Our reasoning for going back to Iowa was for my cousins wedding Reception which was actually not for another month. On Saturday we went to the winery which was supposedly on the way to the reception. We got a drink and Stephanie our photographer was hiding in plain site for when I proposed. After having a glass of wine, which was much needed to calm my nerves, we walked down one of the rows of grapes. I had her stop about halfway down and got down on one knee. You could hear Stephanie snapping pictures. I had a speech planned out but in the moment i couldn’t get out anything other than “I love you, I will love you forever, will you marry me.” She responded with “yes, of course yes.” We then had a mini engagement shoot with Stephanie who did an incredible job. I could not have asked for a better photographer and better weather. At this point she was suspicious of the dinner and ended up seeing both our parents cars in the parking lot. The dinner was great and was actually our first time back since our first date. During this time she tried to face time all of her closest friends causing my stress level to go up as all of them were waiting for us at the brewery for the surprise party. A couple answered but did a great job of acting surprised and not giving anything away. We finally got to  the brewery and she was totally shocked to see all her friends. She couldn’t believe it, and I could finally breath as the surprises were over.

Conor’s side of the story:

How they met:
Ben at I met while attending attending the University of Iowa. We were both involved in Dance Marathon (an awesome organization that raises money for pediatric cancer), and my position involved monthly communications and meetings with a group of students, one of them being Ben. Even so, it was not until later that year after the Big Event for Dance Marathon that we had our first conversation. We were both out with mutual friends, and we struck up a conversation over a couple of beer steins. After that, we seemed to keep bumping into each other downtown every week until Ben suggested we try hanging out during daylight hours. We went on our first date shortly there after and talked until the restaurant was closing around us. And the rest, as they say, was history. We have just always clicked and loved each other’s company. Ben was accepted into Iowa’s PA program, which thankfully left him in Iowa City while I finished my engineering degree. The next year and a half was filled with on-and-off long distance as Ben moved every month for clinical rotations, and I accepted a job in Chicago. Ben moved to Chicago last fall, and now here we are.
The proposal:
Ben and I had been planning to go to Iowa City for a couple of months. I was led to believe that a wedding reception for his cousin was the reason for the trip. We had planned to spend Saturday doing our favorite Iowa City things before the party. We went to our favorite breakfast spot, shopped downtown and walked around the pentacrest. Ben suggested we go to Cedar Ridge Winery for a drink as it is half way between his house and the reception. We got dressed up for the wedding and headed that way. We sat outside and tasted various wines, enjoyed some cheese and charcuterie and just enjoyed the atmosphere. Ben suggested we walk through the vines. Half way through, Ben stopped, got down on one knee an proposed. I said yes, of course! That was when I noticed the photographer in the corner of my eye. We were able to walk around a take many more photos to commemorate the day.  Ben told me we had dinner reservations at the same place we had our first date. To my surprise, both of our parents, siblings and grandma were there to ring in the celebration. We toasted over champagne and enjoyed the meal together. Someone suggested going to grab some beers at Big Grove to keep the celebration rolling. When I walked in, I was on a mission to find a table big enough for our entire group when I was completely taken aback by a large group of our friends and family waiting to celebrate with us. It was an amazing surprise engagement party! I was so grateful to be surrounded by loved ones to share in our joy! And yes, we did head downtown later to share one more stein together were it all started.  We are so happy to have the beautiful photos from that day!! They are perfect! 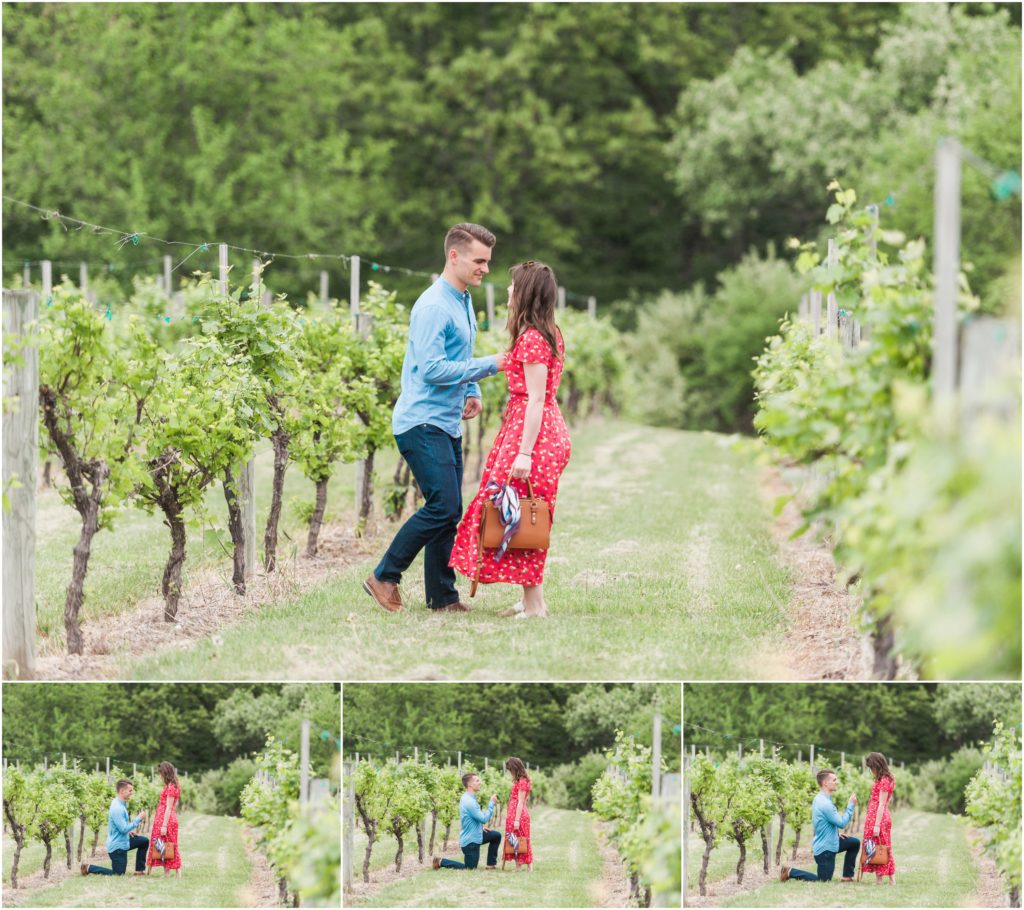 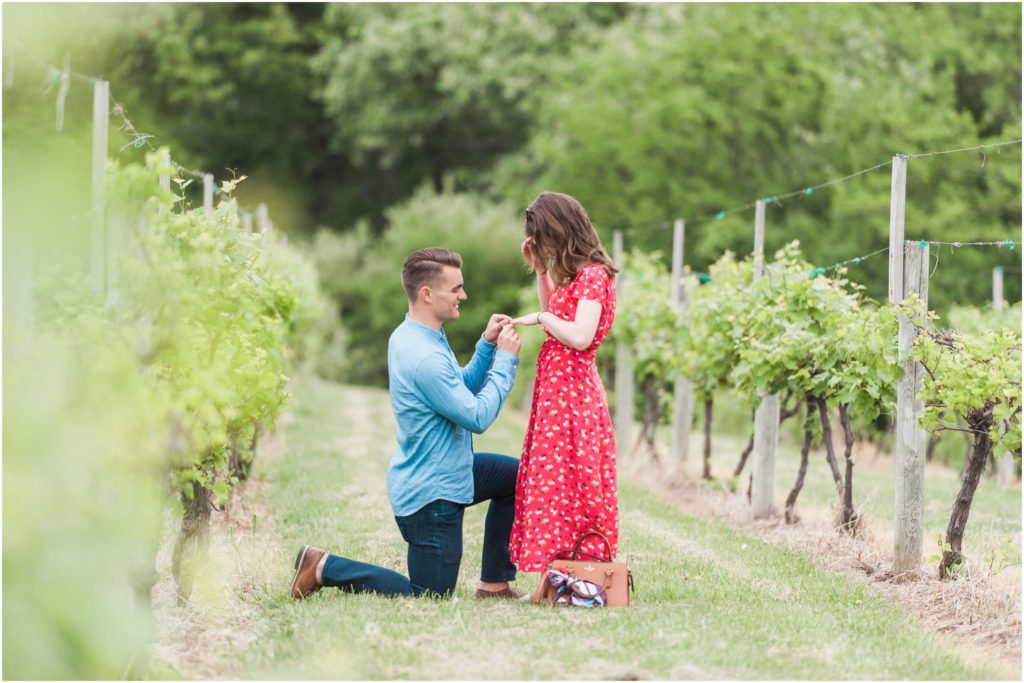 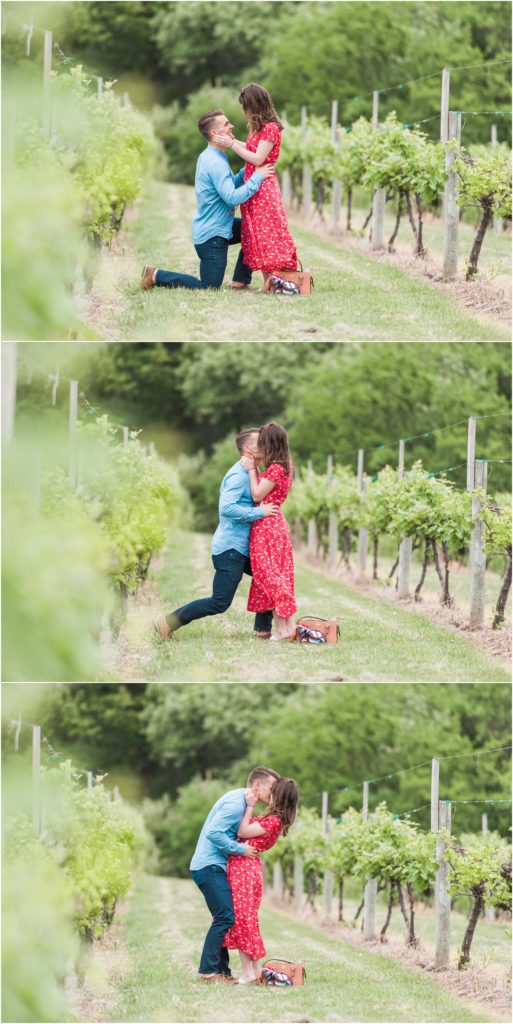 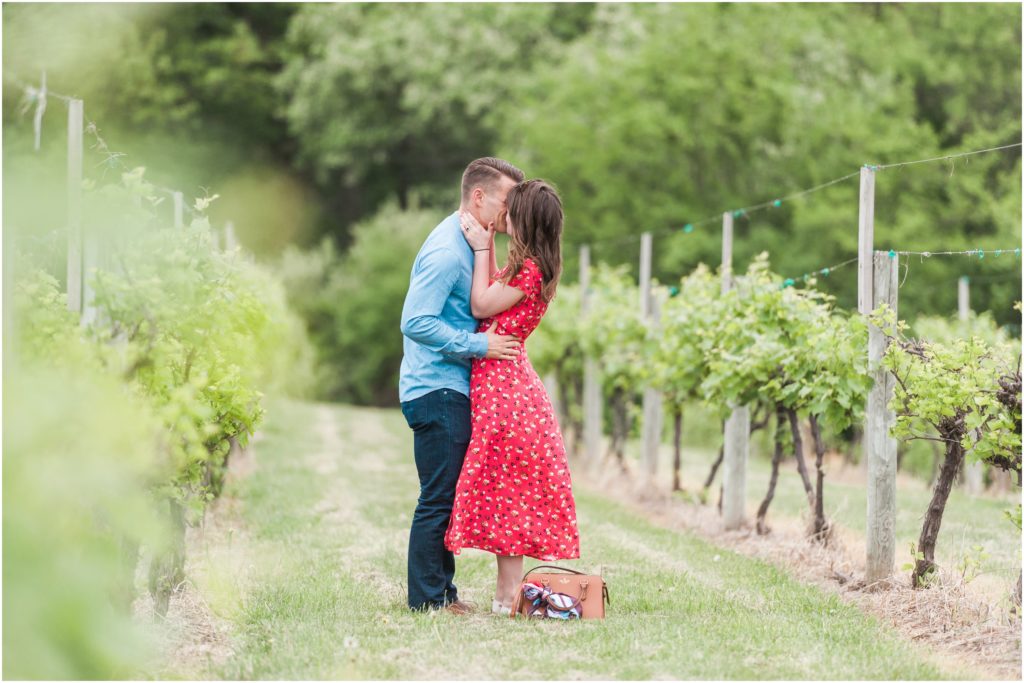 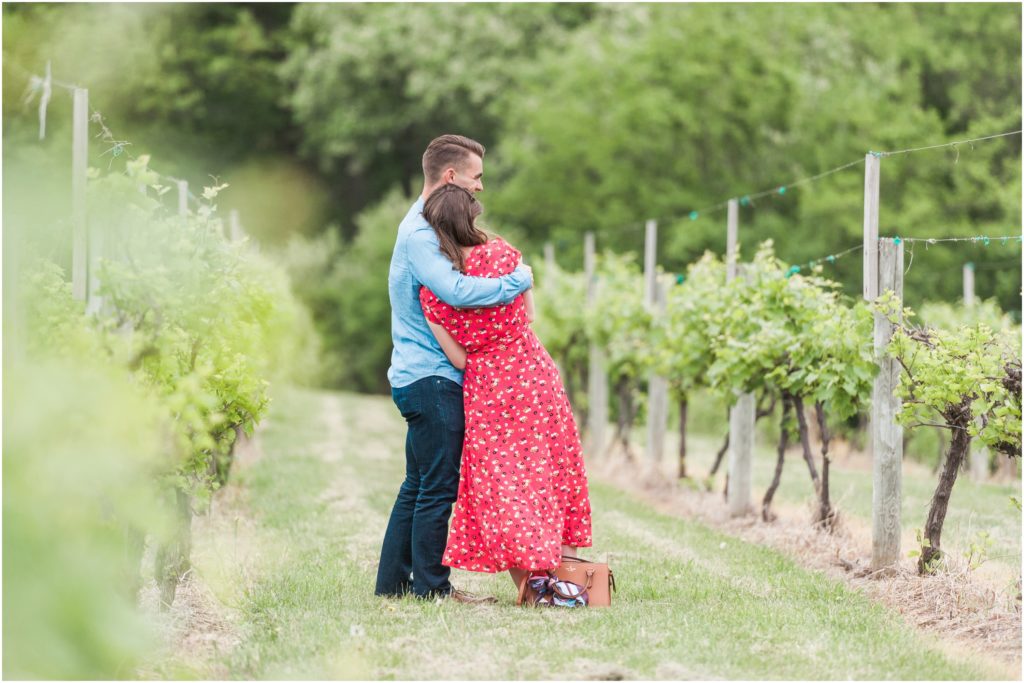 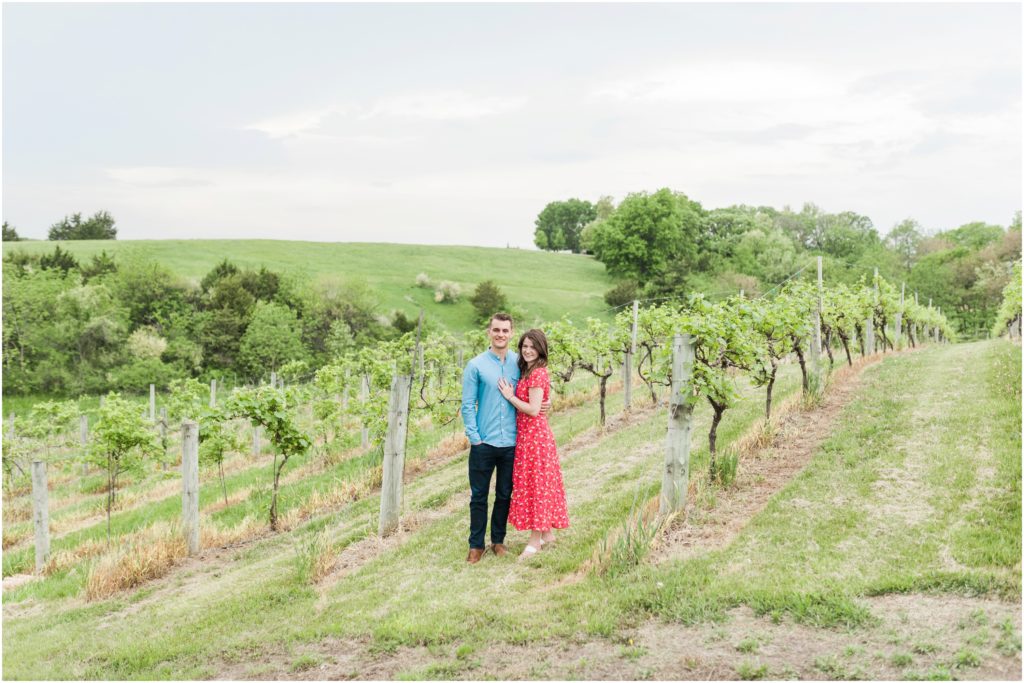 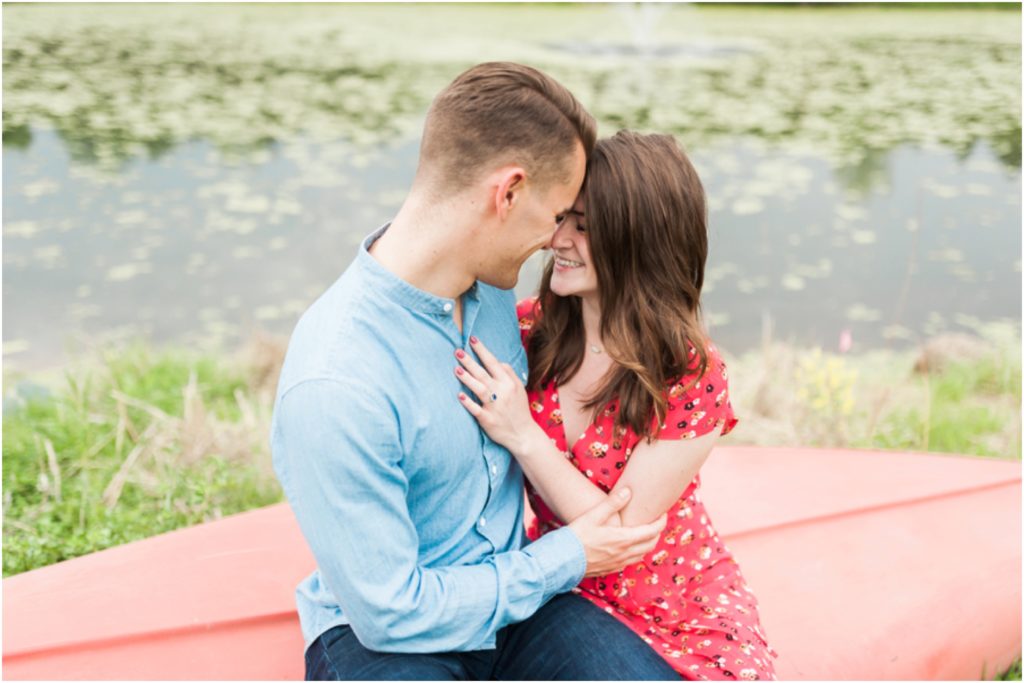 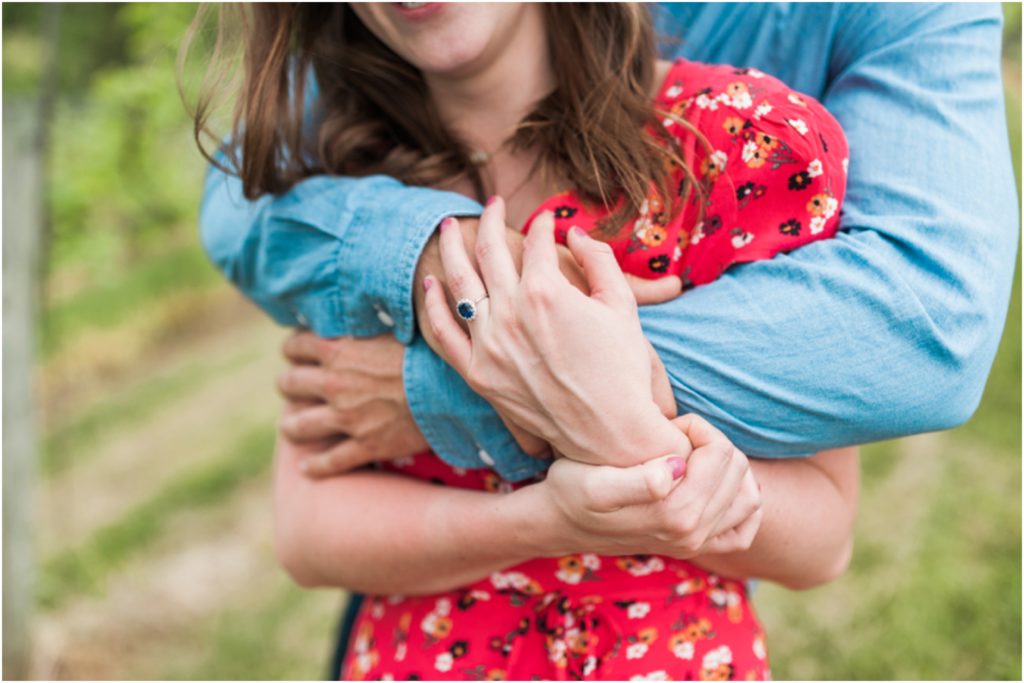 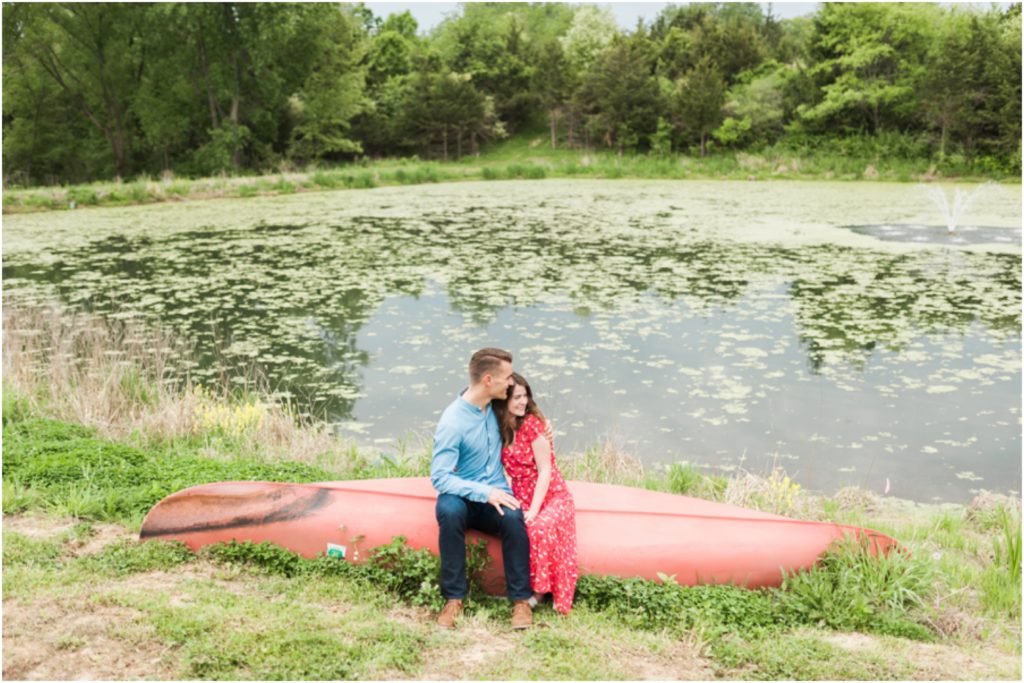 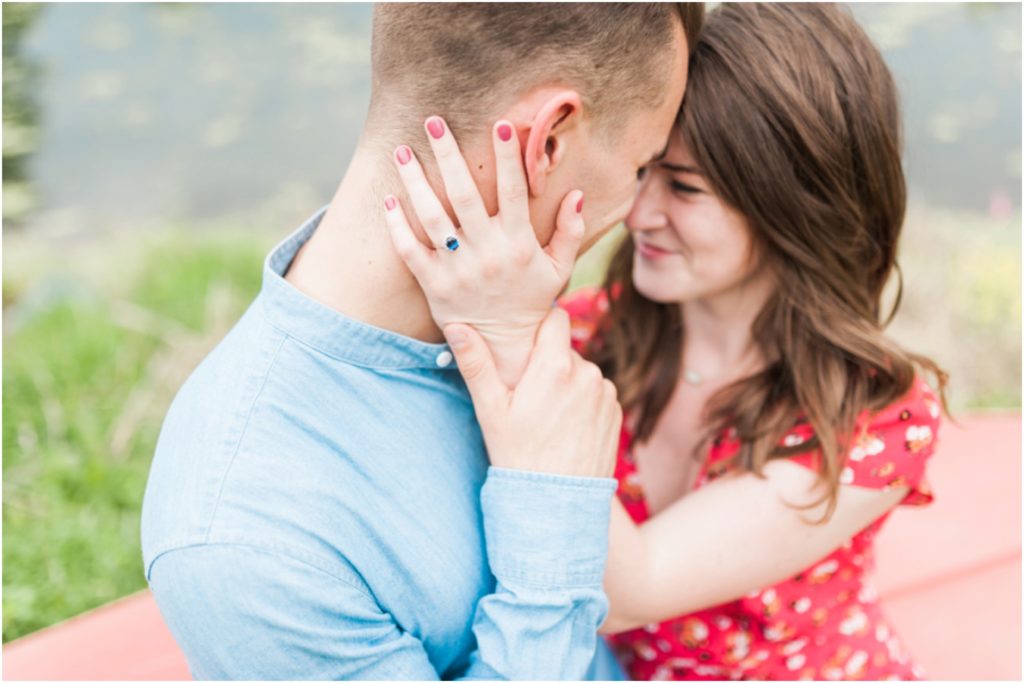 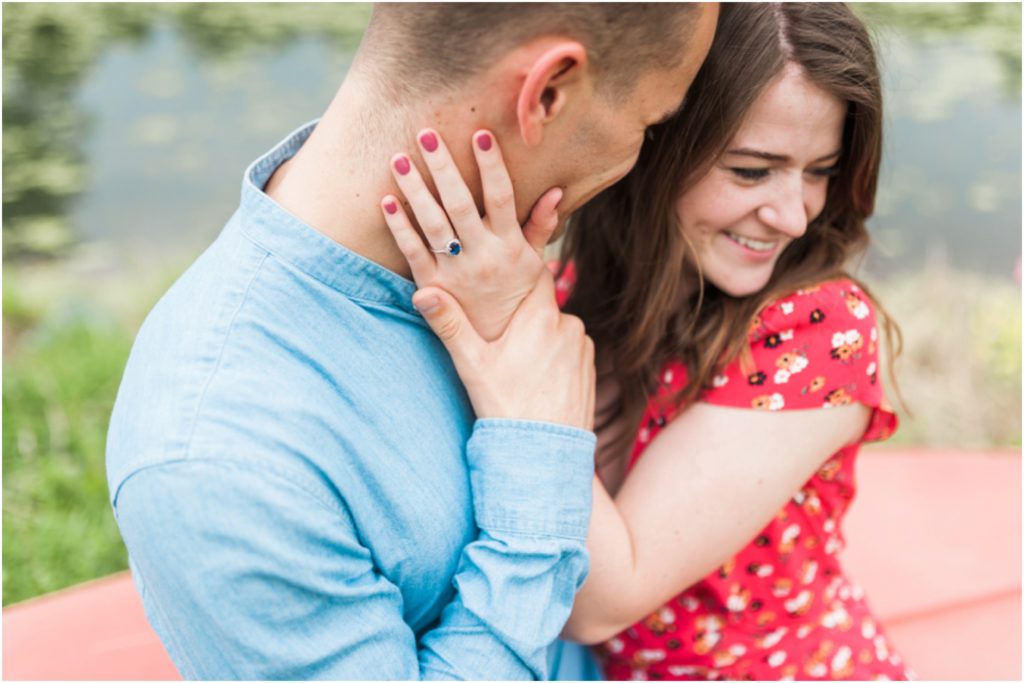 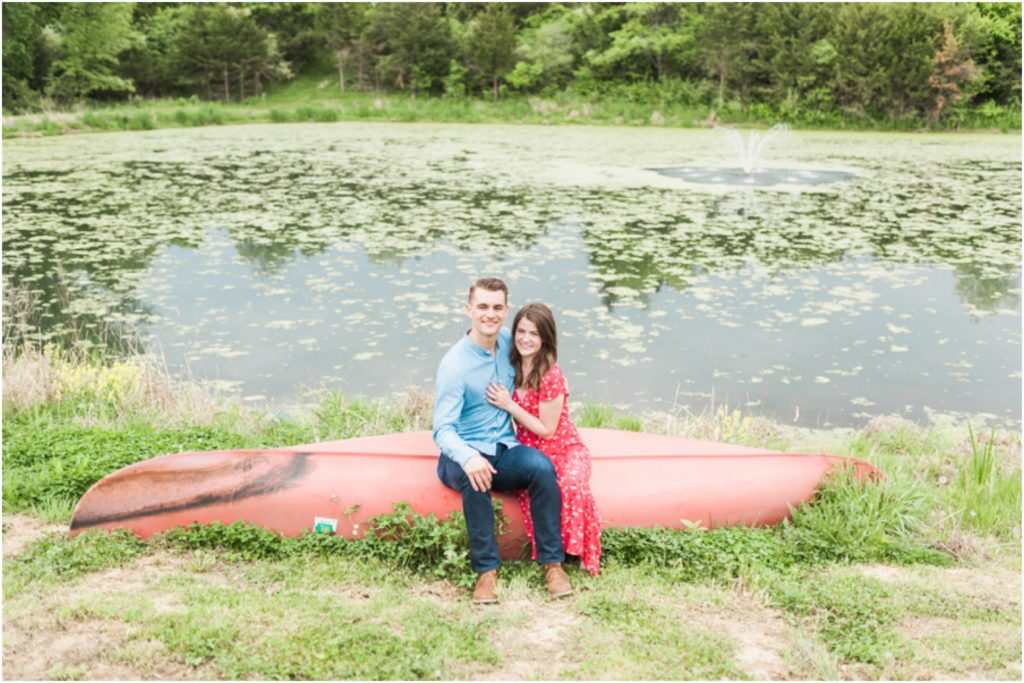 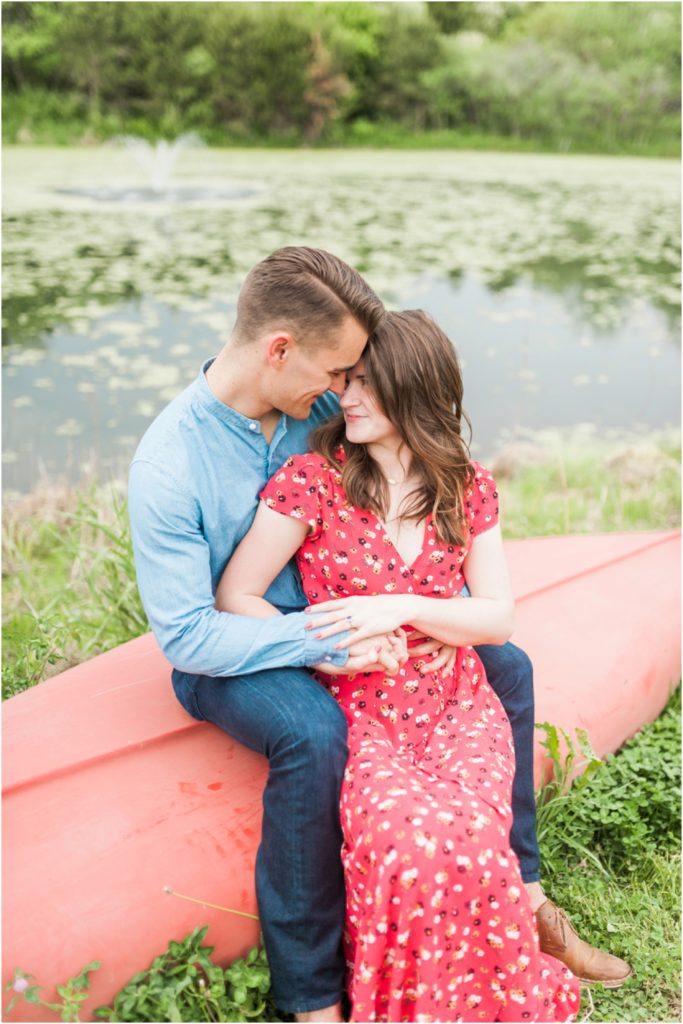 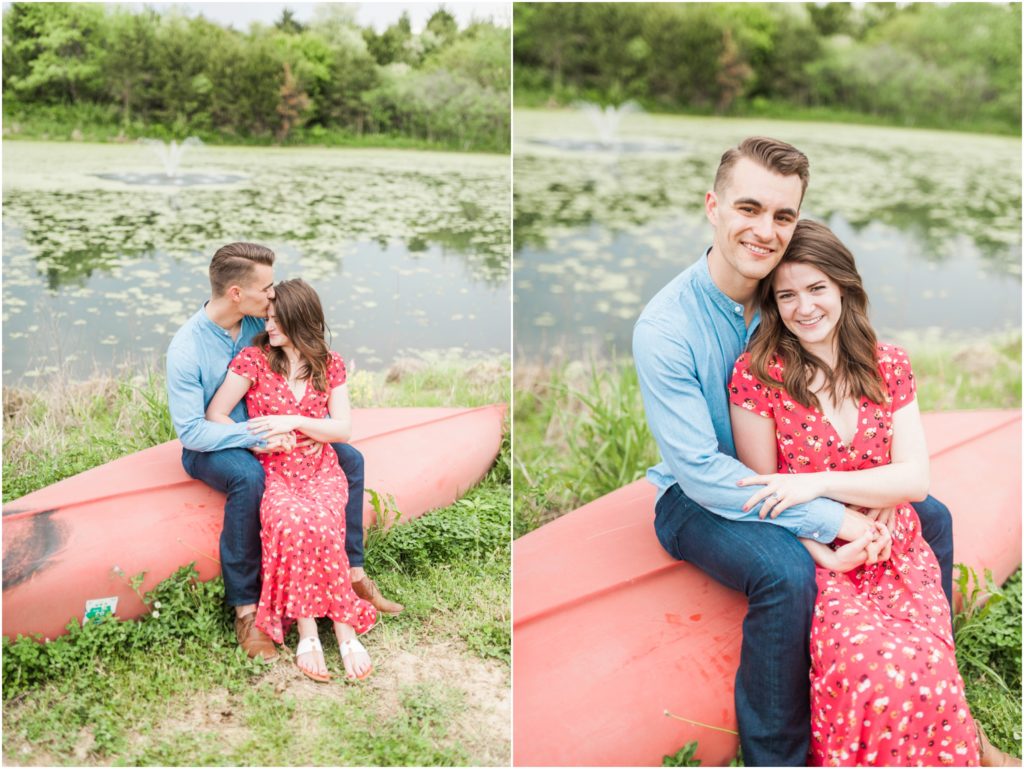 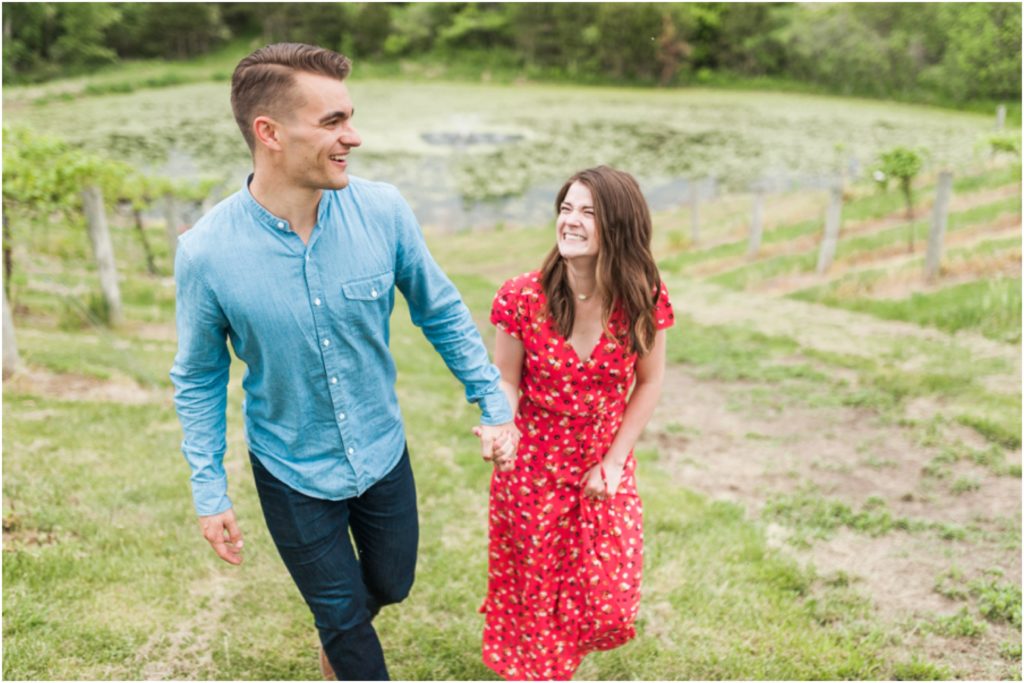 I absolutely love the story behind their relationship. They look like the sweetest couple. The views in the background of the images is so beautiful! That ring is stunning!

These are absolutely beautiful!!

Omg!!! I love this!! My husband proposed to me at cedar ridge also, after an all day scavenger hunt!!!

How cool is this?! Love it! And these images are stunning!

I LOVE surprise engagement pictures, they’re beaming with happiness!! I love that you were able to capture every phase she went through in the surprise too.

These are the best engagement pictures are the ones right after the proposal!

How awesome that you were able to capture this couple’s special proposal moment! I wish someone would have captured mine 🙂